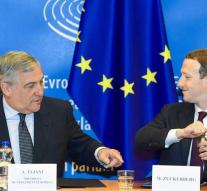 brussels (anp) - Many questions that political groups in the European Parliament put to Facebook CEO Mark Zuckerberg remained unanswered on Tuesday. Because of the conversation design and the limited time, dozens of questions did not receive a reaction, as some people feared beforehand.

Maintenance took a little longer than planned at 1.5 hours. Zuckerberg said he answered a number of important questions and promised to pass on answers in the coming days.

When asked if the scandal with Cambridge Analytica is the tip of the iceberg, he said that thousands of apps need to be investigated. 'The research is going to take months. '' Cambridge Analytica had developed an app with which the data was collected.

It is unclear, for example, whether and when Facebook users whose data were misused are compensated. There was also no answer to the question of whether there is a possibility to be deprived of targeted (political) advertisements.

Zuckerberg's answer to questions about the alleged channeling of profits was limited to: Facebook pays all the taxes it legally owes and invests a lot in Europe.