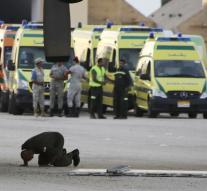 - The plane crash in the Sinai Peninsula is the deadliest in a Russian device for years, but hours after the accident the 224 dead seem almost forgotten. The main question that hangs over the crash : who or what is the cause? Several theories are doing the rounds, including a technical defect provisionally seems the most likely. However, unrest caused by Islamic State (IS), which claims to have the gear lowered.

The unit of Russian society kogalymavia disappeared Saturday morning the radar. The plane was a short time later spotted again in Turkish airspace, but that turned out to be wrong. A rescue team soon found the wreckage. Egyptian media initially reported that rescuers had heard voices from the wreck, but that was not true.

In total found 221 Russian and three Ukrainians death. Dutch were not on board, the Ministry of Foreign Affairs held on the " no indication " To have that Dutch were in the unit.

The Airbus A321 was on his way to St. Petersburg from the resort of Sharm el-Sheikh. The Russian news agency TASS reported that the pilot air traffic in Cairo had asked to be allowed to land. There would have been something wrong with the equipment on board. Shortly after the message traffic lost contact. After a steep nosedive it crashed in a mountainous area near Bir Hasana.

The region Sinaai is very restless. Different groups of jihadists fighting there with the Egyptian army and security services. Reports that she had been shot were emphatically denied the device by the authorities. IS made ​​stronger by these rumors, however, later to be published on the day that their supporters had shot down a Russian plane carrying more than 220 passengers.

Should IS still speak the truth, then this will undoubtedly have an impact on the fight against IS. For now, however, the Russians refuse to believe that IS has brought down the unit. Then what is the cause of the crash is knowing the Egyptian and the Russian authorities yet. Air France-KLM and Lufthansa take at least be safe than sorry : they avoid temporarily the airspace over the Sinai desert.