Home / World / Many protests at Nazi-March in Berlin 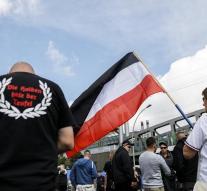 berlin - The authorities expect a lot of unrest and counter-demonstrations of the huge Nazi march that begins at noon in Berlin.

There are 500 to 1000 neonazis expected and at least as many antifascists. The police are present with a lot of manpower.

Hess, Deputy of Hitler, died in a prison in Berlin in 1987, thirty years ago. Neonazi's say Hess was killed by his allied cypresses.

They have forged forged posters with this message hanging along streets in Berlin. They claim that the police are looking for the killers, which is not the case. The posters are provided with glass shards and razor blades.

The right-wing radicals can register their march along the former prison with a smile. Their motto is that the archives must be opened.