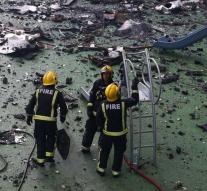 london - The London fire brigade managed to save a lot of people from the blazing Grenfell Tower tower on Tuesday on Wednesday. But the firefighters eventually did not penetrate through the nineteenth and twentieth floors of the building, according to fire director Dany Cotton.

The apartment building counts above the ground 24 floors, reported British media. The fire brigade was worried Wednesday that it would collapse, but Cotton said later that the rescuers could still work safely. However, specialists are busy investigating the stability of Grenfell Tower.