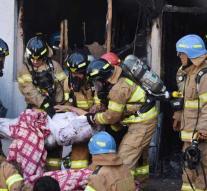 seoul - A large fire in a hospital in the South Korean city of Miryang has killed dozens of people. In addition, many people were injured, reports the fire service. According to the South Korean news agency Yonhap, it is at least 41 dead and about eighty wounded. The number of victims is still expected to rise.

The fire probably started on the first floor at the emergency department of the Sejong hospital. The BBC reports that at the moment the fire broke out there were about two hundred patients in the hospital and an adjacent nursing home. The fire brigade had extinguished the fire, which was limited to the first floor, after three hours.