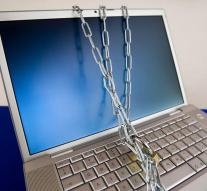 - The number of investigations into cybercrime will increase from 156 at present to 360 by 2018. To make this possible, pulling the government next year 5 million from 2018 and 14 million euros for tackling cybercrime. 360 of the studies that have been provided in terms of fifty complex.

The money will include for Team Tech Crime Police. The National Detection Center is expanded. The center is a partnership to cyber threats to notice faster and thus faster to be able to act.

The Ministry of Security and Justice sees crime increasingly shifting from the real world to online.