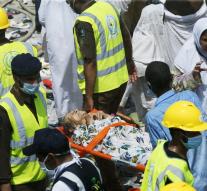 mecca - During the mass panic that arose last month when a ritual during the hajj in Saudi Mecca are many more deaths than reported so far through official channels . That allows the German news agency DPA , based on its own count. DPA is based on more than 1,800 deaths , while the authorities in Saudi Arabia have reported 769 deaths.

For the census, DPA figures used from official sources and media.

The victims came from 28 countries. Iran is the hardest hit, with 465 deaths. There is also a Dutch among the dead.