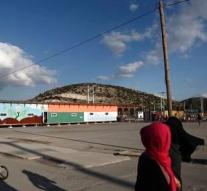 athens - Migrants are increasingly returning from Greece to their country of origin. Since the beginning of this year, 14,000 have already returned home. The Greek police say that it is mainly people from Albania, Pakistan, Iraq, Georgia and migrants from North African countries.

The reason for returning is simple, according to the Greek authorities: it is clear to many immigrants that they do not have a legal chance of staying in Europe.

According to the International Organization for Migration, only 1598 people returned from Greece in September. The IOM supports these people actively. The organization helps with the trip and also makes available to each returning migrant an amount between 500 and 1500 euros. With that money, they can begin in their homeland to rebuild their lives.