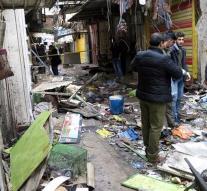 baghdad - Least 21 people were killed Saturday by two bombings in a crowded market in central Baghdad. According to doctors and police, there are at least forty wounded.

The police said that the bomb went off in the morning at a shop for auto parts in the Sinak district and ensured that arose in many shops on fire. One of the two explosions was caused by a suicide bomber, the other by a bomb placed, reports the Ministry of Interior.

Responsibility for the attack has not been claimed. Islamic State is often responsible for bomb attacks on civilian targets in the Iraqi capital.