Home / World / Many kill by collapsing wall at wedding 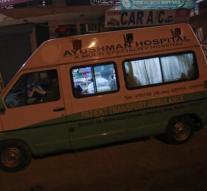 new delhi - At least 26 people died in India when a wedding party collapsed during a wedding. A few tens of people were injured. The wall and the enclosure attached to it were swept by a heavy storm and heavy rainfall.

Presumably there were food stalls against the wall and the people hurled to the heavy rain. Among the dead are four children. The accident happened in the Rajasthan region, usually a very dry area. Incidentally, collapsing buildings are not rare in India.