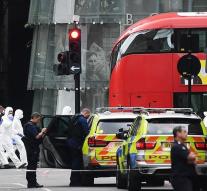 london - Among the victims of the terrorist attack in London are also foreigners. One of the seven dead was a Canadian citizen, said Canadian Prime Minister Justin Trudeau. Another came from France, said Minister of Foreign Affairs Jean-Yves Le Drian.

Seven French were still in hospital on Sunday, another was missing. According to the BBC, there was also a New Zeelander among the injured, who lay on the operating table for hours.

The German government confirmed that two Germans were also injured. Of 21 out of 36 wounded in hospital on Sunday, the situation was critical, reported the BBC.

A woman at a hospital told the BBC that her son was stabbed by a man who called 'this is for my family, this is for Allah. '

The Ministry of Foreign Affairs in The Hague said there were no indications that Dutch were among the victims.