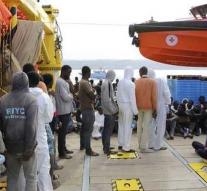 warsaw - In Italy far less illegal migrants arrive via the Mediterranean than last year. In March there were a small 1400, nearly 90 percent less than in March 2017. In the first three months of this year, there were about 6600, a three-quarters decrease compared to a year earlier.

The European border agency Frontex reported that, without giving an explanation for the decline. In a quarter of the cases it concerned Eritreans, with Tunisians as the second group.

In Greece, over 7900 migrants arrived in the first three months of this year, an increase of one-third compared to a year earlier. The increase is mainly caused by people who came overland from Turkey. This mainly concerned Syrians and Iraqis.

In Spain, 3400 people entered the sea illegally in the first quarter, comparable to last year. This mainly concerned Moroccans, followed by people from Guinea and Mali.