Home / World / Many dozens injured in attack in Kabul 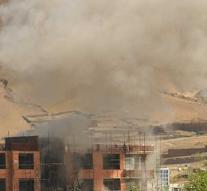 kabul - In the event of a major explosion of a truck that was loaded with explosives, several deaths and approximately eighty injuries were reported to have occurred Saturday in the center of the Afghan capital Kabul. The bomb truck exploded according to local media at a checkpoint of security forces, near a building that was previously the Ministry of the Interior and close to a large hospital.

Nearby are also the European Union's embassy and embassies from, among others, India and Sweden. Earlier this month there was a bloody attack on the Intercontinental Hotel in Kabul. On Wednesday there was an attack on the office of aid organization Save the Children in Jalalabad, 125 kilometers east of Kabul.