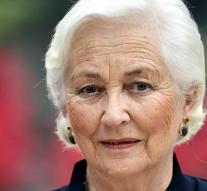 - Queen Paola had a flood of medical treatments last year. In total, Philip's mother arrived eleven times with the GP, 42 times at a specialist, there were seven hospital visits, two surgical procedures and four recordings.

That reports Het Nieuwsblad on the basis of the 2016 activity report of King Albert and Queen Paola.

The royal couple sums up the doctor's visits to explain why they did so little public activity in 2016. According to the report, there were only a dozen.

Belgian parliamentarian Veerle Wouters believes that the compensation for Albert and Paola can be reduced if they do so little activity. 'They receive an annual dotation of 900,000 euros. Over 700,000 euros are working assets, the rest is wages,' she says.

This year, Paola was again treated with a setback. Round the turn of the year she was treated for a vertebral fracture she had suffered after a fall and in February the queen returned to hospital, this time with a broken hip.