Home / World / Many discussions on the fringes of climate summit 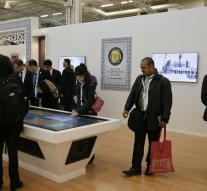 - The climate summit which began Monday in Paris, is used by many of the 150 world leaders to discuss other world problems. US President Barack Obama and his Russian counterpart Vladimir Putin are the main attendees.

They talked each other on the opening day of the biggest problems of our time: Syria, Ukraine and the Russian fighter jet that Turkey last week brought down.

The latter issue remains a thorny issue. Putin has said not to speak with the Turkish President Erdogan. He had again called a meeting with his Chinese counterpart Xi, who already spoke with Obama.

21 climate summit was opened by Secretary-General Ban Ki-moon of the United Nations. He said that the world is a political moment when no longer will be possible in Paris. Want world leaders to combat global warming, they will have to cooperate and show flexibility. Flexibility is particularly needed when the next twelve days being negotiated greenhouse gas emissions.

A major obstacle is the fact that in particular the United States and Canada do not want the agreements reached at the summit are binding. On the other hand, the US and China, belonging to the countries with the highest greenhouse gas emissions, to know at the start of the summit indicated that they will commit themselves drastically to reach a climate deal. Which deal primarily implies that a long-term goal should be : global warming must not exceed 2 degrees.

After the recent attacks in Paris by Muslim terrorists are the security measures surrounding the summit at Le Bourget, northeast of Paris, very extensive. The meeting site is protected by no less than 2800 agents, while France's borders, including the airports and harbors, are controlled by another 8000 people.

Police in the capital held so far already three hundred protesters. The demonstrations come across a total demonstration ban imposed because of the attacks of 13th November.