Home / World / Many deaths from heavy fighting with Taliban 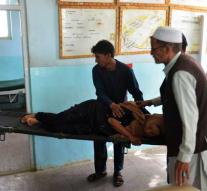 kabul - Heavy fighting between Taliban fighters on the one hand and police and army on the other hand in the Afghan city of Ghazni have claimed many lives. At least a hundred agents and soldiers were killed and many dozens of people were killed alongside the Taliban.

The strategically located Ghazni was attacked by the Taliban on four sides on Friday. The city lies on the road between the capital Kabul and Kandahar in the south of the country.

To ward off the attack, President Ashraf Ghani sent special units to the city. American advisers are along and NATO aircraft performed air strikes on Monday.

'American advisors are assisting the Afghan forces and the US air weapon has handed down decisive blows to the Taliban, since August 10, more than 140 have been killed,' said the US military armed forces in Afghanistan.