Home / World / Many deaths from explosion in Baghdad 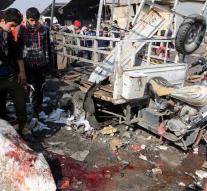 baghdad - At least eighteen people were killed in an explosion in the Sadr City district in the Iraqi capital of Baghdad. According to the police, at least 90 people have been injured.

A spokesman for the Ministry of the Interior said that the explosion was the result of an explosion of ammunition. It was stored in a mosque and detonated according to the police when it was transported. Security forces have started an investigation.

The ministry called the explosion rather 'terrorist violence against civilians with martyrs and wounded as a result. 'It is not yet known who is responsible for the explosion.