Home / World / Many deaths from collision bus and truck in Congo 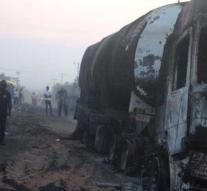 kinshasa - Because of an accident with a bus in Congo, at least 27 people were killed. The vehicle crashed on a truck in the night from Monday to Tuesday.

The incident was in Kisantu in the west of the country. The police think that both vehicles drove too fast at the time of the crash. In the Congo more serious accidents happen because of being driven too fast, vehicles have technical defects and because of the poor condition of the roads.