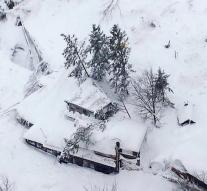 - ROME There are many killed by the avalanche that buried the luxury hotel Rigopiano in the Italian town of Farindola. That is confirmed by Antonio Crocetta, head of the alpinists rescue workers of the Abruzzo region. One victim was recovered.

More than thirty people have long been buried more than 24 hours under the snow and rubble. It will be difficult to save them. There were besides the staff more than twenty guests, including a number of children. The hotel was half collapsed at 1200 meters altitude in the Gran Sasso mountain in central Italy. The avalanche has been devastating. The hotel has been moved ten meters.

The cook of the hotel Giampiero Parete (38) survived the stupid accident. 'I had just gone out of the hotel to get something from the car. I was overwhelmed by the snow, but I managed to get out. My car was not buried, so I waited for help. '

Parete was the one who then has beaten alarm via SMS. Antonio Crocetta and his team of ten alpinists of the Guardia di Finanza found him hypothermic. Parete is now in the hospital of the city of Pescara and runs no risk. But his wife and children are buried under the snow. Except Parete has so far saved only one other man.

The officers of the Guardia di Finanza have until four o'clock tonight to reach the hotel with skis, another way was impossible. And then had to start in the huge cold searching for survivors in the half-collapsed hotel. 'We call them loudly, but nobody answers', the agents let know. They had initially digging with their hands.

Late in the morning was flown by helicopter equipment to make it easier to dig. The main aid, including ambulances, remains at nine kilometers away stabbing. The high snow makes it almost impossible to continue.