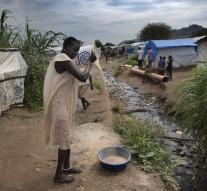 juba - Despite a peace agreement is in clashes in Southern Sudan last month certainly eighty slain civilians, reported the United Nations. Among them were at least 57 children, says the UN Office for the Coordination of Humanitarian Affairs (OCHA) Saturday, citing local partner organizations.

The fighting in the state of Unity between 4 and 22 October also raped at least fifty women. Thousands of people have fled the region. Around 6000 people have taken refuge in a UN refugee camp in the town of Bentiu.

" The resumption of fighting is forcing humanitarian agencies to withdraw from several places, leaving 250 000 people have lost access to humanitarian aid ", according to the organization.

President Salva Kiir and his former deputy, rebel leader Riek Machar, in late August have agreed to cease all fighting and to share power. Since then, however been repeated clashes. The power struggle between Kiir and Machar began in December 2013. Because of the violence have been slain tens of thousands of people, more than 2.2 million people have been displaced.