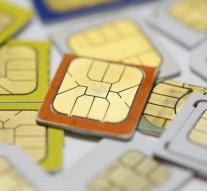 brussels - Some hundreds of Belgians can not call anymore from Wednesday. They have not registered their anonymous prepaid card and are closed.

Of the 3.1 million maps, it is estimated that approximately 400,000 (85 percent) will be deactivated, according to figures released by minister Alexander De Croo (Telecom) on Tuesday night.

Providers must do that as a government measure in the fight against terrorism. The action has been announced a long time ago. The deadline for registration is official Wednesday at midnight, but two out of three major providers are advancing and pulling the plug off 24 hours earlier, reported business newspaper De Tijd.

Thursday is being checked whether the closures have been completed, says a spokesman for De Croos. He notes that some of the sim cards that were active in the past six months are no longer used. Over the past week, about 200,000 people have put their SIM card in the name.