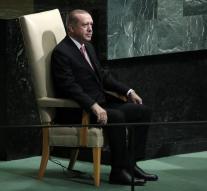 istanbul - The Turkish parliament has extended the mandate for the deployment of Turkish soldiers in Iraq and Syria by one year. The decision comes two days for a referendum on independence in the autonomous Kurdish region in northern Iraq.

The spokesman for Turkish President Erdogan has called that referendum a 'horrible mistake' that will lead to new crises in the region.

The mandate has been extended several times since 2014. Turkey has been conducting air attacks on the statements of the Kurdish Labor Party PKK, which is prohibited in Turkey, which has its headquarters in the Kandil Mountains. According to Turkey, the referendum poses a threat to its safety. The Turkish government has threatened, among other things, with economic and political sanctions if the public consultation continues on Monday.

The Turkish army is also active in Syria. It has conquered areas in the north of the country with pro-Turkish rebels who had to surrender the Islamic State terrorist group. Increasingly, confrontations are reported with Kurdish militia in Syria.