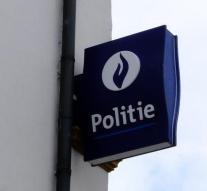 - A man with a machete, a large machete, on Saturday two policemen wounded in the Belgian city of Charleroi. He called according to local police,, Allahu Akbar '(God is greatest) during his act. The man is off,, but alive, '' the police reported.

The attack happened at the police station of the Walloon city. How are the victims is still unknown.