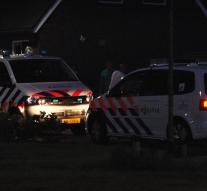 The stabbing took place in the Emmastraat. The suspect was shortly after being arrested nearby. He is stuck.

The victim was taken to hospital. The police started an investigation.