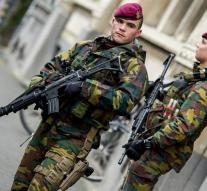 antwerp - Belgian soldiers held a man with an ax on Saturday and handed him to the police. That reports Belgian media.

The soldiers would be warned by a couple. The two saw the armed man walking towards Meir, one of the city's busiest shopping streets.

The man was detained until the police arrived on the spot. This confirms Belgian authorities to VTM. The man with the ax is arrested.

Why he walked armed across the street is still unclear.