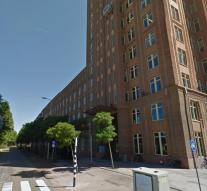 the hague - An installer became seriously injured on Monday morning after falling down nine yards in the elevator shaft of an office building in The Hague. The man was taken to the hospital with speed and under supervision.

The installer was in the elevator shaft when he fell from the fifth to the second floor. What he fell for is still unclear.

In addition to fire brigades and ambulances, there was also a trauma helicopter on the spot. As it is a business accident, the SZV Inspectorate is investigating.