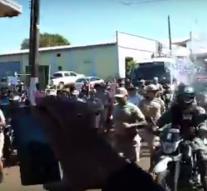 - The journey of the Olympic flame by Brazil prior to the Games in Rio de Janeiro has again fallen into disrepute. This time a spectator tried to extinguish the flame by putting a bucket of water to throw out.

But failed. Only the carrier of the flame and security agents were wet. The 27-year-old offender could be arrested later at his home. He stated that he had incited his act by his friends. It is unclear whether he had a political motive.

Proença has been released on bail. If he is convicted of wanton destruction is he faces a sentence of between six months and three years above the head, CNN reported. It is not clear when he appears in court.

Meanwhile Proença seems to enjoy his sudden fame. On Facebook, he shares news and even a video of his arrest and he set to post a selfie know that it went well with him.


Last week, a jaguar was slain after it was used in a ceremony with the Olympic flame. The animal escaped after a shoot her guardians, attacked a soldier. Because anesthetic darts were not working the animal was shot.