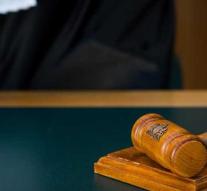 brugge - A 43-year-old man from Bruges had to stand before the Belgian criminal judge on Thursday for three facts of public sex offense. Bahri T. stood among the window of a cafe with his genitals to swing. The Public Prosecutor demands a year in prison and a fine of 2000 euros. The judge pronounces on 8 March.

'I was drunk and I wanted to swim in the canal,' T. said at the session. He could not remember anything from the incident at the cafe. The defendant said about the facts in the reception center: 'That woman showed me her pink underwear, that was not my fault. '

Bahri T. already came into contact with the death threats court in 2014 during his son's football match. With a knife he made stitches in the direction of the new friend of his ex-wife. In that case, T. was sentenced to 30 months in prison, half of which was conditional. In the meantime, this sentence was changed to 30 months unconditional, because the Turkish Bruggeling did not keep its conditions.