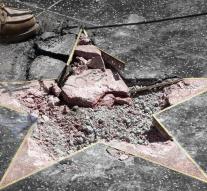 los angeles - An American man has been charged with destroying Donald Trump's star on the famous Hollywood Walk of Fame. The 24-year-old Austin Clay can get three years in prison if he is convicted, reports American media.

Clay gave himself to the police on July 25th. He would have carved a pickaxe on the Trump star one day earlier. Witnesses said that the man had hidden the tool in a guitar cover. After the attack on the star, pieces of concrete remained behind on Hollywood Boulevard.