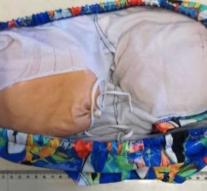 lisbon - At the international airport of Lisbon a man was arrested on Monday who had hidden a kilo of cocaine in fake buttocks. These buttocks were processed in a special pants.

How the Portuguese police discovered that something was not completely out of the question is not clear. However, the man and a second suspect, the presumed recipient of the drugs, were put into cuffs.

The two suspects are 32 and 40 years old. The man with the fake buttocks flew via Belém, located in the north of Brazil, to the Portuguese capital.