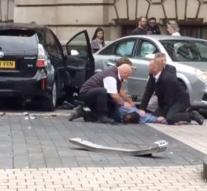 london - The police in London released the man who entered Saturday at pedestrians at the Natural History Museum in the center of the British capital. He is suspected of driving dangerous and remains subject of research, according to British media Sunday.

Eleven people were injured when the 47-year-old man entered their vehicle with his vehicle. The police stated shortly after the incident that it was not a terrorist act and sought for witnesses. The wounded have no life-threatening injury and most have already left the hospital.