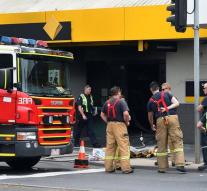 melbourne - A man has set himself on fire in a busy bank in the Australian city of Melbourne. 27 people were injured.

According to police, the man walked with a jerry can of gasoline inside the bank. Moments later there was a great ball of fire in the building.

According to police, it is still too early to say what was the motive of the man. The perpetrator survived. He's in the hospital, but officers have not been able to speak to him.