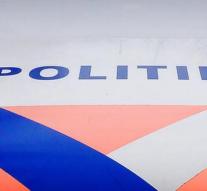 rotterdam - Police in Rotterdam is looking for a man Monday night around 19:00 tried to commit a robbery in amusement Plaswijckpark. The man had a shirt of the park and used what appeared to be a firearm. There is no one injured.

According to a spokeswoman for the police he raided an office in the park and he threatened the existing staff; He wanted money. Whether he has captured is unknown. At some point he took off and disappeared. It is noticed the unknown or park visitors something of the robbery.