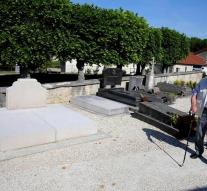 chaumont - A 38-year-old man has known to the French police that he has violated the tomb of former French President Charles de Gaulle in disguised condition. Justice in Chaumont declared Wednesday that the man's motive is not clear.

He climbed on the grave last Saturday in the North French Colombey-les-deux-Eglises and stepped two times against a nearly one-and-a-half-meter high cross, causing it to break down. French politicians reacted badly to the incident.

The man was detained between Chaumont and Colombey on Tuesday. The police had tracked the man on the basis of images from a security camera.

De Gaulle is one of the most important figures in French history. He died in 1970.