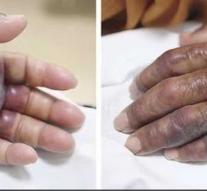 seoul - Warning: this photo will ruin your appetite. Eating sushi has cost a 71-year-old Korean man his forearm. Doctors saw no other option than to amputate the terribly swollen forearm.

The culprit: the bacteria vilnio vulnificus, which resides in the sea and can also nest in fish and especially crustaceans. The bacterium usually causes symptoms such as vomiting, diarrhea and abdominal pain, but can also show 'carnivorous' puffs. And the latter happened in the non-named Korean after eating from- according to later- infected sushi, Health reports. com.

After eating, the palm of the man, who already suffered from diabetes 2, showed kidney problems and high blood pressure, an enormous ulcer. During the treatment, doctors discovered the presence of the bacteria, which was controlled with antibiotics. That did not offer a solace; the man also developed sores on the back of his hand and his forearm. After all, it had to be amputated.

Doctors warn that eating seafood is by definition a (small) risk of contamination of vilnio vulnificus. It is estimated that around 52,000 people worldwide become ill from a vilnio infection after eating contaminated food. 10. They also order sushi from a reputable restaurant, where the ingredients are fresh and kept cool. Oh, and for the lovers of oysters: you do not eat them raw.