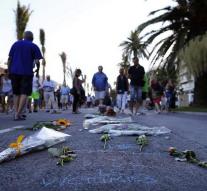 - An evening watching fireworks ended for a Frenchman in a living hell. He had to watch his wife, son, parents and in-laws were run over by the truck murder.

The group of Longwy, at the border of Belgium, was vacationing in Nice and had just enjoyed the fireworks show when the truck came toward them.

Christophe Lyon was the only family member who survived the horrific attack. He lost his wife Veronique (55), son Michael (28), parents Gisele Lyon (63) and Germain Lyon (69) and his parents-Francois (82) and Christiane (78).


The man is very traumatized and has not spoken since the attack.