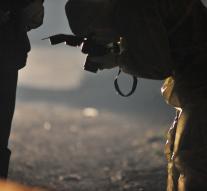 sarajevo - A gunman who shot two Bosnian soldiers and wounded another on Wednesday committed suicide after police his home on the outskirts of Sarajevo were surrounded.

According to authorities Enes Omeragic opened fire in a bookies near army barracks. There, he shot with an automatic weapon two soldiers dead. Later, he covered a city bus in which a third soldier was injured. A spokesman for the police in Sarajevo reported Thursday that the bus driver and two passengers were injured by flying gas.

Premier Denis Zvizdic called the shooting " an attack against the state ". The motive of the killer is still unknown. According to neighbors Omeragic recently radicalized and he hung on Salafism. The security has been increased around military bases across the country.