Home / World / 'Man killed who cheers for loss of Germany' 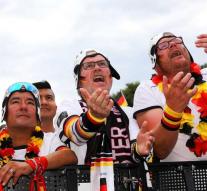 beirut - A Lebanese young man who himself is supporter of Brazil, was stabbed to death by a fan of Germany on Wednesday evening. This is reported by various local news sources, including Gulfnews.

The incident happened in a coffee shop in Beirut. The victim, 20-year-old Mohammed Zahar, was celebrating Brazil's victory. When a German fan came in, the two got into conflict, because Zahar would have welcomed the loss of Germany.

The German fan turned out to have a knife. He put Zahar down on the spot. In Lebanon, the incident is felt full of horror, which feels surreal. 'Killing somebody for a football match is the madness', someone reacts.

According to some news sources, the two neighbors would have been. That has not been confirmed. The police are currently investigating the incident.