Home / World / Man killed in restaurant after complaints about food 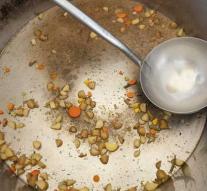 delhi - In Delhi, a 30-year-old man was murdered by three restaurant staff after he complained about the quality of the food. This is reported by the police against the Press Trust of India.

The victim, Pawan, owns a lunch in Mandawli and traveled to the eastern part of Delhi to get some food. This, however, did not appeal to him for a meter, so he complained about the dished food.

That did not appeal to three employees of the restaurant. Sachin, Govind and Karan used a broken ladle and attacked it. Pawan was hit several times in his lower back.

The victim was rushed to the hospital, where he succumbed to his injuries during his treatment. The three men have been arrested.