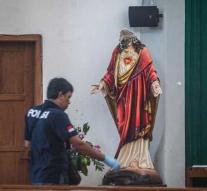 jakarta - A man with a sword wounded four people on Sunday during a church service in Sleman in the Indonesian province of Yogyakarta. One of the wounded is a German clergyman.

The police said the man rushed into the church in fury and taunted the believers who were close to the entrance. Then he ran to the altar with his sword and attacked the German clergyman there. He injured three other people, including a policeman.

The police could not say anything about the motive for aggression.