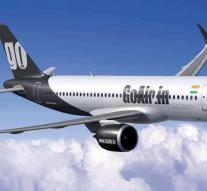 mumbai - An Indian passenger caused considerable panic when he tried to open the aircraft door in the middle of a flight. The man was reportedly mistaken and thought it was the toilet door. AFP reports that Tuesday.

The man flew from New Delhi to Patna on Saturday with airline GoAir. 'A fellow passenger was alert and warned the crew,' GoAir said in a statement to AFP.

According to Indian media, the man flew for the first time in his life and was about 30 years old.

According to The Telegraph, a newspaper from Kolkata, fellow passengers asked the man what he was doing. He would have replied that he had to 'badly use the toilet' and he kept pulling at the door.

The door remained closed and the plane arrived safely at the destination.