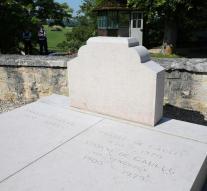 colombey - An unknown man has violated the tomb of former French President Charles de Gaulle. The man climbed on the grave on Saturday at the end of the afternoon in the North French Colombey-les-deux-Eglises and hit two times against a nearly one-and-a-half-meter high cross, causing it to break down. That reports French media.

French politicians reacted badly to the incident. 'The Gaulle is holy to the French,' said the president's office in a reply. Former president Nicolas Sarkozy calls on vandalism an insult to France and its values. The new Prime Minister Edouard Philippe also expressed concern about the message site. According to him, the destruction of the grave is an attack on France.