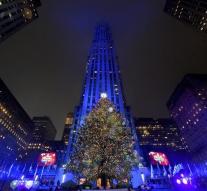 - A man with a tank and matches was arrested on bag at the giant Christmas tree at the Rockefeller Center in New York.

According to police in the American metropolis behaved 38-year-old from the Bronx Yuriy Alterman suspicious. He threw bottles, challenged passersby and scolded for agents. The man had a book with him with the title 'Son of Hamas'.

The man stated that he did not intend to stabbing the tree on fire. According to the police he did not come near the tree. He was arrested on suspicion of causing terrorist threat and disorderly conduct.