Home / World / Man goes to work to save money 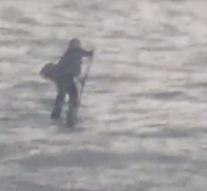 new york city - A man from New York City has devised a remarkable way to avoid traffic jams and save costs during commuting. The man in his suit sweeps across the Hudson River.

Eunice Rivers saw the man paddling while she was in the ferry herself and could not believe her eyes. According to American media, the 32-year-old Scott Holt is from Jersey City. 'I did not want to pay the toll,' he would have explained.

The man arrived at his work on time and without a wet suit.