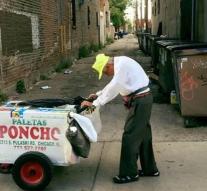 - "Little VillageHet is hard enough to push an ice cream cart in the clammy heat through the busy streets of Chicago, let alone for the 89-year-old Fidencio Sanchez. Because his daughter- her parents helped financially- recently passed away, the elderly couple had to leave their pension for what it was. A ground passerby changed all..."

"Fidencio Sanchez (89) and his wife are still torn apart by the loss of their daughter. To pay the bills, they were both selling ice creams in Little Village, the elderly woman became ill. Since then, Sanchez is working twice as hard and he deserves this 50 to $ 60 per day."

"Macías posted a picture of Sanchez on Facebook with an honorable argument for the hardworking old man. He then started a crowdfunding action with the aim to collect 3 000 dollars for Sanchez. Meanwhile, more than 320 000 dollars gezameld together."