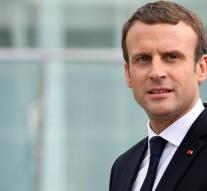 paris - The police in France arrested a 23-year-old man last week to prepare an attack on French President Emmanuel Macron. That reported several French media Monday morning. The man with extreme right sympathies would have wished to hit the defilation on the Champs-Élysées on July 14, the French national holiday.

The man from the Paris suburb of Argenteuil was arrested on the basis of a tip to the police, reports radio station RMC. He would have written on a computer room website to be looking for a Kalashnikov to take an attack.

The unemployed man who calls himself 'nationalist' would have declared to the police to have a political act. He had also provided for 'blacks, Arabs, Jews and gay men. 'The man was convicted last year for the glorification of terrorism.