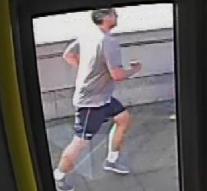 london - The British police arrested a 41-year-old man who had pushed a woman on a bridge in London for a bus. Camera images showed that the vehicle could just outweigh the 33-year-old victim, which became light-wounded.

The suspect would have pushed the woman from nothing while jogging. Then she fell off the sidewalk partly on a busy road. Because the bus driver responded quickly, the woman did not suffer serious injuries.

The incident took place in May, but the jogger's arrest left months behind. The police recently asked the public for information about the man and received a lot of comments. Agents arrested the suspect Thursday at an address in Chelsea.