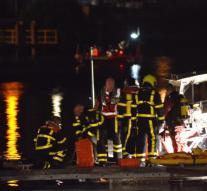 - In marina Comfortparc the Waage Naak in the Limburg Wessem is a man in the night from Saturday to Sunday drowned after he fell from a boat. The victim probably fell while peeing in the water.

After the fall the fire was turned on. Other emergency flocked spot. After searching for almost an hour, the man was found at a jetty. Salvation was no longer possible.