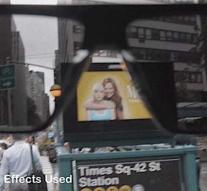 los angeles - Today we see more and more intrusive screen ads on the street, which can be very tiring. Scott Blew, an engineer from Los Angeles, designed a pair of glasses to escape this screen bombardment. With these glasses all screens, on smartphones and most computer screens, are completely black.

Blew got the idea when he stood in line for a food truck, where he was also confronted with the endless stimuli of flashy screens. He remembered having read something about a special kind of film that blocks both LED and LCD light. He ordered some of this material and placed it in a spectacle frame. It worked exactly as he had hoped. Whoever looks at a advertising screen only sees a black screen.