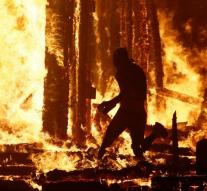 black rock city - A man who ran the fire on Saturday night at a ceremony at the Burning Man festival in the desert in the US Nevada died of his injuries on Sunday. Firemen tried to save the man when he introduced the bonfire.

The man was swallowed by the flames. With a helicopter he was taken to a hospital where he later died.